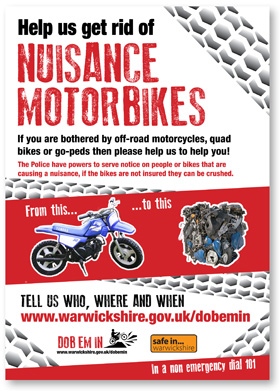 REPORT A CRIME TO THE POLICE

Anti-Social Behaviour involving motorcycles is a significant problem in the north of Warwickshire. There are two distinct groups of offenders who cause the nuisance.

The first group are those who have the purpose built off road machines and wear the appropriate protective gear. They use vans and trailers to transport the machines to the locations. They target public and private areas across north Warwickshire to practice their hobby. They rarely have permission of the land owner to ride on the land. (Should the landowner give such permission then they would be responsible for the public liability issues should injury be caused to anyone, insuring against the liability would be almost impossible). Damage is caused to public walking areas and to farms crops.

The second group are those who are involved in the stealing or handling of stolen motorcycles. They strip them down to a basic shell and then ride them on public roads, public spaces and private land. Riders do not wear protective equipment, this includes helmets, they rarely have driving documents and have no respect for the law. When the motorcycle is no longer of use they are dumped and in some cases set on fire. Some of these riders have been involved in collisions receiving life changing injuries and putting other people in danger of injury.

If you are bothered by off-road motorcycles, quad bikes or go-peds then please help us to help you!

Recently, the number of people using public and private land in order to ride motor bikes illegally has increased. We receive numerous complaints from members of the public about these incidents.

We will then take your anonymous information and work with the Police to identify the riders and deal with them. 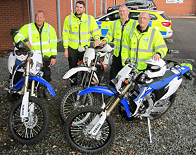 Police Off Road Bike Team
In September 2015 Warwickshire Police received funding from Warwickshire Police and Crime Commissioner to purchase 3 off road bikes to help tackle the issues of nuisance motorcycles. The bikes have enhanced the capabilities of the team. There are a number of trained officers to ride the machines and they will be targeting areas where incidents are reported. All incidents are collated for times, dates and offender descriptions and the team aim to deploy resources as appropriate to catch offenders. The Team operate in North Warwickshire and Nuneaton & Bedworth Borough’s.