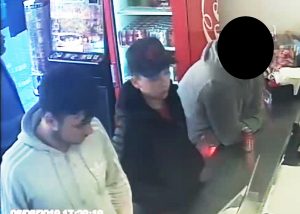 Officers continuing to investigate a robbery in Bulkington have released a CCTV image of men they would like to speak to.
The incident happened on Brampton Way at around 10.45pm on Thursday 6 June after the victim – a man in his 70s – left his property when he heard a noise outside.
An unknown offender is reported to have entered the house and carried out an untidy search of the property.

Shortly afterwards, the victim was approached by three men who threatened and pushed him to the ground before assaulting him and pulling a watch from his wrist.
The men made off in an unknown vehicle towards Kingsley Crescent.
Enquiries are continuing and police would like to speak to the men pictured as they are believed to have information that could help with the ongoing investigation.

They are also keen for anyone who was in the area at the time to come forward.
*A 31-year-old man from Keresley arrested on suspicion of robbery has been released under investigation while enquiries continue.
The men, anyone who recognises the men, or who has information is asked to call 101 or Crimestoppers anonymously on 0800 555 111 quoting incident number 412 of 6 June.