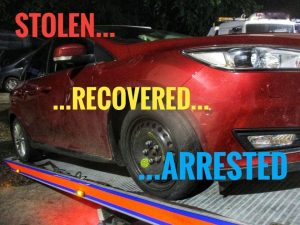 Following work by the Rural Crime Team, a Ford Focus suspected of being used by a male wanted for various offences was distributed across the force.

Within 2 days officers from our OPU team (Operation Patrol Unit) spotted it in a rural village around midnight. The wanted male was on board and examination of the car found it was displaying false number plates having been stolen from Aylesbury in April.

A 17 year old male from Ryton on Dunsmore was arrested and later charged with conspiracy to commit burglary and money laundering offences.

Great teamwork by all involved.