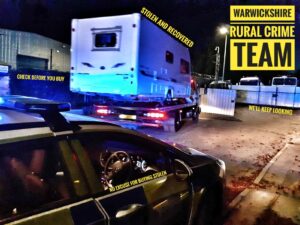 Officers from the Rural Crime Team and Rugby Police Safer Neighbourhood Team attended a location near Ryton on Dunsmore this week.
Information was received that a stolen caravan was being stored at the location.
The caravan was confirmed as stolen, taken from Inkberrow in Worcestershire in 2016, so was seized and recovered.
Unfortunately the caravan was unattended on arrival, so officers weren’t able to speak with anyone at the time. We will of course follow up on the matter over the next few days.
Following this recovery, the Rural Crime Team has recovered approximately £ 900k worth of stolen items since its inception.
Posted in All Warwickshire Areas, Farm & Equine Only County, North Warwickshire Rural Area, Nuneaton and Bedworth Rural Area, Rugby Rural Area, Stratford Rural Area, Warwick Rural Area
← Arrest at Furnace EndCaravan Stolen in Brandon →